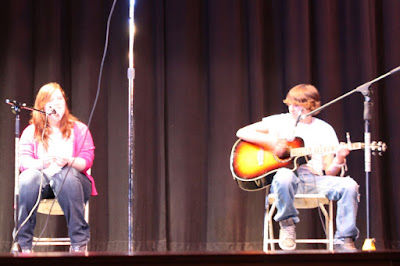 Jamnesty 2012 was a huge success with 10 bands and over 150 people in attendance. We celebrated Amnesty International's 50th birthday in style. Temporary Name, Ukulele Orchestra, Double O Negative, In This Order and  Justin, Duncan, Kendall & the Jester played in the first set. Everyone learned about what Amnesty International has been doing over the last half century. It's amazing what they/we've accomplished over the years without the Internet, Facebook and Twitter! Too Mainstream, The Half, Silver Hammer, Kendall & the Kendallettes and Stand Tall performed during the second set. Throughout the evening we were entertained by our incredible MCs Ally and Mitch. Congratulations to this year's winners!

Show your support and pics of Jamnesty tonight on our event's Facebook page.
Labels: events, jamnesty

Jamnesty is finally here! Be at the school at 6:00 to help set up. Wear your Amnesty shirt tomorrow to school and tomorrow night.

Make sure you spread the word with your friends to come tomorrow night, too. We have 10 bands--it should be a good competition!
Labels: events, jamnesty

As of today, Connecticut is the 17th state in the United States to abolish the death penalty. Thank Governor Dannel Malloy and other Connecticut leaders through Amnesty International for their work with the bill here.
Labels: information

Thanks so much to everyone who attended the screening! It was great to have so many people from our club attend.

Here is a video about what is coming up next for IC:

Remember, our screening is tomorrow at 6:00 at St. Luke Lutheran Church. Come see the Kony 2012 movie and hear about the conflict. Bring your friends and family too!
Labels: events, invisible children

Today is the day to Cover the Night! Look around on Facebook to find a group you can meet up with to serve your community then hang up posters.

Contact your head of state via twitter, email, or a personal note to encourage them to unite with other world leaders to stop LRA atrocities.

Ask your head of state to support the international effort to stop LRA violence and help rehabilitate the communities affected by the conflict.

When you are selling shirts, remember:

Today, tweet these four key world leaders whose support of the African Union will be critical in stopping LRA violence:

For day two, contact the African Union and United Nations through Twitter to encourage them to continue to take action to stop the LRA.

Check out the new Jamnesty Committee Task calender on the right of the page to see what your committee needs to acomplish before Jamensty.
Labels: jamnesty

Leading up to Cover the Night, Invisible Children has a full week of advocacy planned.

Today, Monday, they are asking you to sign the Kony 2012 pledge showing you support IC's efforts and share it with your friends.

Don't forget to spread the word about our screening coming up in six days on April 22nd at St. Luke Lutheran Church!
Labels: invisible children

Cover the Night at LHS

Come to LHS at 6:00 pm this Saturday, April 14th, if you are free to hang up Invisible Children posters for our Cover the Night to promote our upcoming screening on April 20th.
Labels: invisible children

Tom's One Day Without Shoes, that raises awareness about the daily struggles of those who are forced to live without shoes, is happening today, April 10th. Participate if you can!

Labels: information
Newer Posts Older Posts Home
Subscribe to: Posts (Atom)
"Never doubt that a small group of thoughtful, committed citizens can change the world. Indeed, it is the only thing that ever has."
-Margaret Mead
Tweets by @ledyardamnesty